Let the train take the strain?

I find train journeys to be tiring at the best of times, but doubly so when it all goes awry.

Travelling to Norwich yesterday the scheduled four-hour journey took nearer to seven. The reason: a combination of signal failures, tube delays, a failed train at Liverpool Street (rescued by a new engine) which then broke down for good at Diss - even the taxi rank at Norwich was blocked by roadworks.

And my return today? I'm writing this at Paddington Station six hours after leaving Norwich and still have (if we don't break down) another ninety minutes before getting home.

I know this is a run of particularly bad luck, and I know too that driving the M25 is not much better, but somehow that's not sufficient to make me philosophic. Frankly, our rail network is crap, and the train companies are floundering. If it didn't happen so often I wouldn't be so bold, but I reckon one in three journeys I make are delayed in some way, and more are overcrowded.

All this isn't new, you know it already, or something similar anyway. But I wonder if you knew that a standard rail fare from Chippenham to London is now £146 return - nearer to £240 first class. My trip to Norwich was £309 round trip. Sure there are cheaper deals if you travel when the Moon is in line with Jupiter and know exactly the trains you need and pay about three weeks in advance - but the cost is still prohibitive.

So in response to what is now an expensive as well as crap service, what do the train companies do? As far as I can see they invest in a veneer of customer service, much of which is counter-productive. First, we had rather poorly produced magazines. More recently, Great Western seems to have trained its on-board announcers to go on and on.... just when you want to... and on.... get so some work... and on and on... done!

A moment ago the 'train manager' kindly informed me that the buffet car has a wide selection of snacks, including bacon rolls, muffins, crisps, hot and cold drinks, spirits, wines... (insert almost infinite pointless detail)... that they take cash or credit card.... aghhhh! He also tells me that Reading is our next Station Stop. What other sort of stop is there - a pee stop, a bird-watching stop, a robbery stop?

Okay, enough ranting. The bigger point is that if we seriously want to reduce road traffic and increase rail usage then we have to do better than this. For a family of four to visit the theatre in London it's almost as much as paying for a short holiday. For business travellers to have any faith we need better scheduling, rolling stock - and frankly better contingency when things go wrong.

Most people don't want free magazines, seatback videos or for that matter hot and cold snacks... They want the train to run on time, for pricing to be simpler, and for a little more humility and care from the operators when delays occur. Until we achieve that - and especially until we achieve it with mainline services into and out of London and other major cities - then I reckon we're failing.

As for me, the next time I go to Norwich and am faced with the choice of driving or taking the train, which do you think I'll pick?

P.S. As I finish this we've just had the transport police on board to eject a stroppy passenger - oh what a delight!

P.P.S.  I was further delayed due to transport police ejecting an obstreperous passenger and signalling near Didcot.  Total travel time Norwich to Chippenham - eight hours! 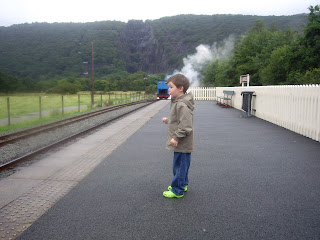