Snow down, slow down 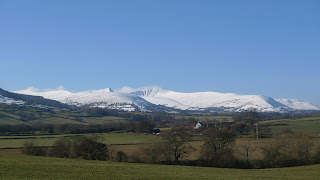 I'm hopeless with snow; as the first flake drifts across my window I can feel myself grumping. I start moaning about impassable roads and frozen hands and pipes bursting. My boys used to try and jolly me up, but now they don't bother. It's too deeply ingrained, a childhood thing; beyond hope, they reckon.

The trouble, I insist on telling them, is that I was brought up in Northumberland. And 'up north' the snow came straight from Siberia and lasted all winter and froze my blood on the three miles to school, without a coat, or gloves, or anything for breakfast... By the time I'm finished they've sneaked out to play in the pathetic dusting that we consider snow down here.  Now when I were a lad...

I know all this is nonsense, but it so deeply reflects how I feel that I can't stop myself. My boys are right: I think it is largely a childhood thing - and perhaps I did have some bad experiences with snow as child?

I certainly never liked boisterous games, and snow always brought the prospect of someone shoving ice in my face, or pushing me over, or worst of all, making me go on those dreadful slides we used to build at school that I could never get the hang of. And my father did used to make us clear the drive, using boards and shovels to make a neat pathway and then refusing to take the car out regardless.  The moment it snowed again we had to do it a second time, shivering hands, wet wellies, the lot.

But all of this is a long time ago and a pretty lame reason to be so belligerent. It's not as if I'm going to be shoved down a slide or forced to clear the drive nowadays. Perhaps I ought to grow up and embrace it?

I would, if only snow didn't mean that my plans go all askew. As a child snow meant not going to my granddad's on Sunday, the otherwise highlight of my week. At work it still means disruption and re-routing and probably extra costs that we'll have to recover elsewhere. Next week I'm in London on Tuesday and already I'm thinking about staying over the night before, or after. I was planning to meet a friend on Wednesday before he goes to France; he wrote this morning saying we'll need to check the weather first. The backpack trip will be off too.

But when I think about it, none of these things really matter. There are possibilities in all of them and it's not as if my moaning will make any difference. I could go walking, and if not I need to slow down anyway - like the snow, drift a little...

Except the roofers! Oh God; one look at the frost and I'll not see them till spring. Now if they'd been born up north, like I was, where the snow came straight from Siberia ...

Dad, is that you ranting?

Labels: About me, NABLOPOMO, Winter