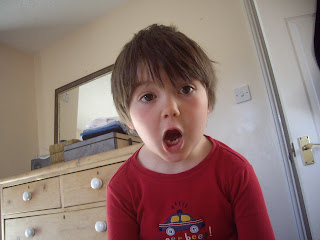 'Should we have a biscuit?' Dylan asked, this evening after dinner.
'All right,' I agreed, 'But just one... so long as you clean your teeth afterwards.'
'Of course,' he replied, taking two from the tin. 'One's for you,' he grinned... 'while we watch the video.'
'I thought you were going to bed?'
'Not till eight,' he pleaded... 'Come on Dad, you know you want to.'
And so I'm typing this post on the laptop as we watch the Big Rock Candy Mountains (for the tenth time). I'm also smiling, because as we left the kitchen Dylan made what might be his first step to a future career.
'Have you been in the sweetie tin?' Jane asked, blocking his exit.
'No,' he replied, holding the biscuits behind his back. 'Just going to watch a DVD with Dad ... '
And as he squeezed past her, he moved the biscuits carefully to his side, keeping them out of sight. By the time I joined him in the lounge he'd eaten one chocolate chip cookie and was looking longingly at the other. Do you want your biscuit Dad? he asked, knowing full well what the answer would be.
I'm a soft touch and he knows it. After a dull day at the office there is no one who makes me happier and he knows that too. Had I told him to put the biscuits back he'd have done so, and I doubt he'd have whinged if I'd said it was bedtime. That's because he's learned outright defiance doesn't work half as effectively as being my buddy and cuddling up on the sofa.
He's always been cute, but his little deception tonight was something different. He knows full well there is no substantial difference between biscuits and sweets as an evening snack - and by hiding them behind his back he proved it. Whilst he didn't exactly lie to Jane, he deceived her by omission.
That's quite subtle for a child of six, I thought - a sign of intelligence I'm sure (must get it from me) - but it could lead to trouble in future. Mmmm...
Perhaps I should talk to him; explain how deceptions lead to mistrust; show the distinction between 'acts and omissions' to be morally spurious...
On the other hand, the Big Rock Candy Mountains is a great video.
And on reflection, I should perhaps encourage it - in moderation of course. After all, a cute manner and a little deception bodes well for a successful career...
...in politics!
And that really would take the biscuit.
Posted by The bike shed at 9:33 PM