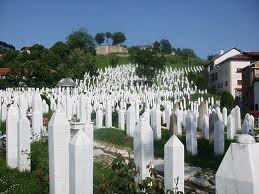 Sarajevo cemetery - Image from Google
I'm suffering from a bad night's sleep; my restlessness made worse by the knowledge that I have to get on with the day. But you'd be wrong in jumping to the conclusion of 'one too many whiskeys' - it is way more complicated than that.

In fact it was words that sparked my insomnia; words and pictures to be more precise. For last night I stayed up reading Missing Lives, a new book by Nick Danziger and Rory MacLean. It recounts the atrocities of the Yugoslav wars, and its disturbing power is that it does so, not by historical essay, but by telling human stories, so simple as to be beyond misinterpretation.

Missing Lives is the stories of bereaved families searching for answers. It is the stories of survivors as much as victims: survivors and victims of the the ethnic cleansing, the teenage conscription, the religious bigotry, the political manipulation, the fear and the barbarity - survivors and victims of a conflict which claimed over 140,000 lives. Yet fifteen years after the Dayton Accord, nearly a quarter of those who died are still unaccounted for.

I have long thought that, to West European eyes, the Yugoslavian war was an unfathomable conflict. Most of us barely knew the location of the supposed countries let alone the towns and regions and subtle differences between the various quasi nationalist factions.

MacLeans words and Danziger's photographs transcend that complexity, focusing instead on the intuitively understandable anguish of its aftermath. And by telling much the same story from each and every side - Muslims, Christians, Bosnians, Serbs, farmers, judges, parents, orphans - they make it clear there were no winners and eloquently emphasise the pointlessness as well as the brutality of it all.

For when you think about it, the Yugoslav conflict was a particularly horrific war. So much so that the philosopher Jonathan Glover described it as being amongst the worst atrocities of the Twentieth Century. His reason is that it happened so late in the century, at a time when the protagonists ought to have known better and have learned from the past; when communication was such that we in the 'West' knew what was happening (remember those TV reports from Srebrenica and Sarajevo) in contrast to say, the sketchy knowledge we had of  the the regimes of Stalin or Mao in the Fifties and Sixties.

Thinking back, I recall my own feelings being that it all seemed such a long way off.  Somehow those strange sounding names - Srebenica, Kranska Gorja Banja Luka - gave it a distance that was greater than the geography. Not only that, but the whole religious and nationalist aspect was based on history I didn't understand. Even when British troops were part of the peace-keeping forces I don't think I understood who or what we were keeping apart. And I suspect I was better informed than most

If my feelings were typical - and I suspect they were - it is not only a sad indictment of our media. It also says something about our isolationist attitudes. The writer Tim Garton Ash has argued that the Yugoslav wars would never have happened in the European Union - partly because of the political structures, partly because of the shared values and history of 'Western Europe'. The Yugoslav wars, he argues, (together with other conflicts that followed the break up of the Communist Block) are perhaps the best demonstration of why the European Union should be cherished - and why it is so much more than the bureaucratic laughing stock the media delight in portraying.

For the disturbing truth is that the conflict was marked by its proximity rather than its distance. To think it took place just over the border from Austria is something worth reflecting on.  So too is the shamefully slow response of most European states -  though we often knock the hypocrisy of American foreign policy, it was the US that made the decisive interventions on what were largely humanitarian rather than political grounds.

But perhaps the most disturbing aspect of the Yugoslav wars is another sort of proximity. How close each of us might be, in similar circumstances, to losing our humanity; how little it takes for 'ordinary people' to tip over into barbarism. Fear and propaganda no doubt fuel that transition, and I'd like to think in our comfortable democracy we have better and deeper values.

Somehow I doubt it; the people whose stories are told in Missing Lives are much the same as you and me; so too are may who acquiesced or even perpetrated unspeakable horrors. As I lay awake last night I kept thinking of football matches I have been to: the chanting, the tribal behaviour, the nearness to violence - if more were at stake than a three championship points I'm not so confident of our better side winning out.

Missing Lives is a collection of stories, each astonishing and horrifying in itself; stories which, according to MacLean and Danziger, needs to be told. It is also a sharp reminder of how lucky we are and how fragile is so much that we take for granted. And it is that unnerving thought, which gave me the sleepless night. 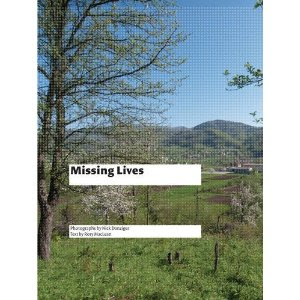 Missing Lives is published in conjunction with major exhibition of Nick Danziger's photographs at the South Bank in London, sponsored by the International Commission of the Red Cross. The book is produced in an unusual format with the pages connected at the leading edge to create a fan-like strip. I wrote to Rory about this and he replied:

It's called Japanese binding.  A single piece of paper on which all the stories are printed, the concept being to link all fifteen stories – a people united in suffering on the page as on the land. The book's fragility is part of the same concept; an echo of the frailness of human life.

All these elements, as well as the carefully chosen format (size) and paper, and to ensure that the reader is not distanced from the events, that he or she holds the stories in their hands, that there is no coffee-table-book distancing.  The design features - like my text and Danziger's images - are all aimed at making the reader stop and think about the events portrayed.
Posted by The bike shed at 7:02 PM

Labels: About me, Books, Politics