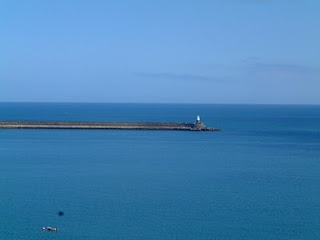 Goodwick / Fishguard Harbour
A few years ago I attended a course tutored by the poet David Constantine. Describing the way he writes, he said his poems emerged in short episodes - what he called 'periods of ability.' He had perhaps two or three of these creative phases each year.
I work in a similar way.
And a sure sign that ideas are coming to a head is when I start making lists, finishing half-read books, eliminating all the little tasks that might distract me. Jane knows the symptoms; she describes it as 'having my job head on.'
I used to think this was something I did out of diligence, but more recently I've realised it's integral to the way I create. For all the while I'm tidying and sorting the physical stuff, I'm doing something similar in my subconscious - clearing a space and positioning my thoughts within it.
This is not a space to think up ideas; those will have been forming for months, sometimes years. The painter Terry Frost said that some of his paintings took twenty-five years from the time of 'seeing' to making an image. I can relate to that. Perhaps this metaphorical space I've been talking about is my way of shortening the process - helping me take what I've 'noticed' and bring it into being more quickly.
The odd thing is that until I start I have no idea what form my writing will take. I begin, at a conscious level at least, with no more than a vague notion. And yet as the work emerges I have a sense that I knew it was going to be like that all along. None of this troubles me; my only problem is choosing the right time to start. Often that seems to emerge as well.
Earlier this week I noticed Google had launched a version of its Chrome browser for the Apple Mac. I immediately downloaded the file and transferred my settings - and as I did so I was washed over by a feeling of, aghhh, that's better. The reason? Chrome reduces all the buttons and toolbars to the minimum, giving you space to see and do. It is lightning fast too.
Then yesterday I sorted my diary, blocking out whole swathes with the instruction 'no appointments - keep free'. Homelife got a similar treatment over the New Year - I've already decided what I'm focusing on for the next few months.
It's no coincidence that after I'd downloaded Chrome I removed the feed-reader and other gadgets from my home page. Then I rattled off some emails, sorted out the bank account, and began clearing the drawers of my desk...
I'm about to start writing more seriously. You'll see and hear less of me for a while. In return, I'll post some of what I produce on the blog. My starting point is 'starlings'—that's all I know for now.  It's all in my head - I just need the space to get it down.
Posted by The bike shed at 7:15 PM

Labels: About me, Art, work, writing