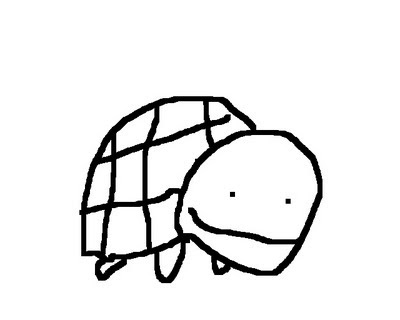 My middle son is creative, and like me he's interested in drawing. He's at that stage when graphics still have a strong appeal, but he increasingly knows there's more to art than cartoons.
Yesterday, he was engrossed at the computer. What was he doing I asked? 'Just some drawings,' he said,'I often make pictures on this programme.' He showed me a large collection of images; some were simple patterns, others more intricate op-art illusions; some, like the picture below, were striking poster- style graphics. 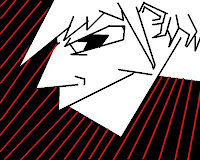 I told him they were excellent. But as we looked, he said. 'The one I like best is the tortoise, only I can't understand why.'
My heart sang, for I'd noticed that image and not said anything. It was far and away his best picture - but explaining why is not easy, especially to a thirteen year old.
It is good, I told him, because it is like a tortoise and yet not like one. Did you draw it quickly? I asked. He told me had, though he'd tried a number of times, deleting each failed attempt. 'This one just felt right,' he said, 'so I left it.' Again my heart sang.
For fiddling is the curse of good art. And had he done so I have no doubt it would have crossed that imperceptible line and become a cartoon. Look again at the images above - the tortoise is not a caricature in the way the face is; it is more like a child's drawing, though again, not quite.
The size of the head is important. For the head is the most fascinating part of a tortoise - it is what we peer at and what peers at us - hence its oversize renditions works all the more effectively. As does the mouth, a slash, a half smile - and the two pinpoint eyes. Anything more, round eyes with pupils say, and we'd be back to cartoons. As I said before - it is like, but not like.
The body too - bang, bang, bang - a few lines and you're there; it's obvious what has been drawn, no need to pretty it up. And three legs, not two, or four - the rear one cocked by a stroke of luck that is common in art, but which requires the judgement to leave it alone.
When you look at the tortoise you know it is 'wrong' and yet it feels more 'right' than a careful rendition could ever be. Why is this and what does it tell us?
In the age of photography and graphics, the role of figurative painting is diminished. Cezzane said that the purpose of art is not to copy, but to make real our sensations. Putting this another way - photo-realistic representation may be skilful, but it is also sterile. This is exactly what Michael's image avoids.
But now for a little perspective: this is not a work of genius; it is a teenager's picture of a tortoise. That said, it has within it all the elements that make for good drawing - real drawing - a sense of likeness, a feeling for the subject, and a primacy of image over craft. These things are vital and in these respects the picture shows promise.
I have only one gripe: it was done on the computer. For all its merits, the screen cannot match charcoal on paper - nor can the cursor replace the hand.
And neither will the processor - dual core or otherwise - ever replicate our instinctive response, which is the basis of all great art.
Posted by The bike shed at 5:00 AM