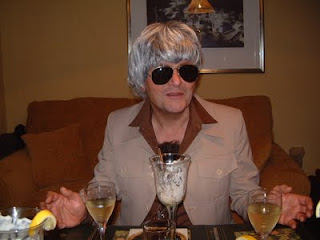 Not me - I promise
Last night, in a swanky London restaurant, I had dinner with some colleagues and our company's lawyers. It was a pleasant evening; we were celebrating a successful deal; intelligent, interesting company, and surprisingly, we didn't talk about work. In fact, we talked about blogs.
Not just blogs, but Twitter and Facebook and social media in general. And their question was, why? Not only why I write a blog - though we'll come to that in a minute - but why is there such a demand to connect with strangers? Their premise was: communication between friends is one thing; talking to anyone and everyone is bordering on the weird.
Now it has to be said this was a typical lawyers' conversation - bright minds, but somewhat theoretical. None had ever read a blog, they were not on Twitter and their experience of Facebook came from their children or a 'friend.' My colleague admitted to being addicted to his Blackberry, and there were empathetic nods over the Cabernet Sauvignon. But aside from email, it was clear that social media had not penetrated the Magic Circle.
The first question was why write a blog at all? Because I enjoy it, I explained, and writing is important to me - when you come to think of it, why paint, or make models or play golf? But couldn't I write without posting it online - why the urge to share? Because publishing gives me an incentive to write more clearly, to care about the words.
Fair enough, but isn't it narcissistic to be writing for strangers? Is that so different to exhibiting paintings, or publishing a book? I replied. When we do those things, we invite people to take a look - to come and see what we have found - sharing our experience is part of the point.
And in practice I do know many of the people who read my blog. All my family read it, including my wife and my children - even Dylan looks in occasionally. Today I received a letter from my father-in-law, describing it as a 'splendid project' and listing his favourite posts. Friends and work colleagues read it too, though interestingly only Sara (who also blogs) leaves comments.
I wasn't getting off that easily. Writing for family and friends is one thing; a putative relationship with other bloggers is surely another? I could argue a few semantic points on this, but the general sentiment is a fair one. I had not envisaged this when I started blogging and yet I value the comments I receive; it gives me a kick that 'strangers' read what I have to say and are prepared to acknowledge it. More than that, I am prepared to return the favour.
Though in practice it's seldom a chore. As in 'real life', where people become friends because they have shared interests and values, I follow the blogs I like and skip those I don't. This is similar to joining a writing group or a cycling club - we look for like minds and shared interests - but in doing so, we understand the unspoken rule of contributing to a spirit of community.
So thanks to all of you who share your writing and comment on the bike shed. To my friends up north, Steve and Dan, Hadriana and Her on the Hill. From Wales: Maggie, Cait and the Celtic Heart. To those sharing life abroad: French Fancy, the Fly in the Web and Abe Lincoln. And nearer to home: Carol and Darren and Michelle at Veg Plotting. As well as all the others: the Zoo Archaeologist, Mrs OMG, Catherine, Sara, Jimmy Bastard and my favourite name of all, the PinkFairyGran - I wonder how those last two would get on together? Apologies to those I forgot to mention.
And so we come to social media - where blogging gives way to Twitter and Facebook - where it is less about writing and more overtly a means to connect. This is not for me, and a side of me empathises with last night's chatter. I find it hard to envisage how it works; twitter is too short and Facebook remains a mystery. But I recognise that others have different attitudes - and where those are shared, friendships (perhaps fellowships is a better word) will quickly form.
I am conscious too that businessmen and lawyers, dining in a London hotel, are not the best judge of these things.
Last Sunday I took Daniel to task for his casual attitude to Facebook invitations. Tell me how many friends you have, I demanded. About 150 was the answer. Then I want you to delete anyone you do not personally know! 'But I know them all,' he replied, '...not like you on your blog.'
I didn't argue. But you know, I think he's not quite right on that one.
Posted by The bike shed at 5:54 PM