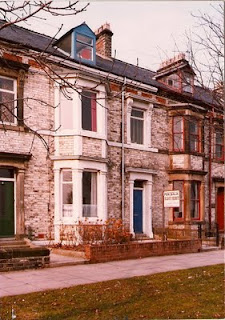 3 Argyle Terrace
In July 1982 I bought the ground floor of a Victorian terrace on the edge of North Shields in Tyneside. I paid £7,700 including legal fees. In return I got a huge flat with high ceilings and original features, a great view over the fields and a neighbour with a punk daughter who played the drums at all hours!
I was twenty years old and had just returned from my third year at university. There were three million people unemployed and somehow I landed a job as a sales rep for a newspaper. That single break allowed me to buy the flat and in so many ways affected the course of my life.
Putting the price of the flat into perspective, it was exactly the same as my first annual wage. I remember I borrowed £300 from my mother to cover the deposit. I was so determined to repay her that I barely did more than eat for two months. Looking back, quite why I was so fiercely independent I can't say, but I don't regret it, or what it taught me. I have remained so ever since.
I lived at Argyle Terrace for three years before moving north to Northumberland. They were three good years - formative, fun, and a long time ago in more ways than one. It would be almost inconceivable now for a young person to buy a decent first home for the equivalent of a year's wage.
And you know, it is not a good thing that they can't.
I feel immensely lucky to have reached adulthood at a time when buying a house wasn't the crippling expense it is today. A blog isn't the place to discuss detailed personal finances, but in the twenty seven years since I bought Argyle Terrace I have never had to take a mortgage more than twice my salary. That combination of good fortune and circumstance (and huge a slug of prudence) has afforded me a freedom from debt that many people only a decade younger, and for no fault of their own, have struggled to achieve. 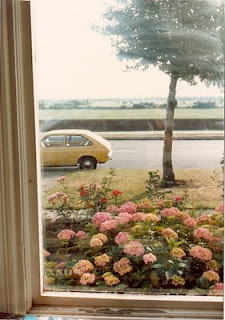 The view from my window - and my first company car!
My Grandfather lived not far from Argyle Terrace. He bought his first house when he was in his twenties and never thought to move until he was seventy seven. His house wasn't an investment; it was somewhere to live and raise a family. That might sound old fashioned, Romantic even, but it has always struck me as the right way to look at it.
There is little that dismays me more than the property boom of recent years. At times I have wanted to scream. We are not richer when house prices rise - and certainly we are not richer as a society. Even at an individual level the 'I have equity' school of thought seldom stacks up. In my case I have supposedly made a handsome profit - but what about my children who will need a home sometime in the future? As a family we are immensely poorer.
A typical home in the UK is worth three to four times its price in 1995. But how does that supposed wealth manifest itself? It's not as if people can cash in and live for free elsewhere. In practice, the real wealth of home-owners of my generation (providing they have been prudent and not borrowed against their equity) is in having a smaller mortgage - something everyone could have enjoyed if prices hadn't risen so aggressively in the first place!
And none of this even touches on how the housing market has skewed our economy, left millions in a mortgage trap, warped our values about what is important. I could make some jokes here about Home Front and Location bloody Location having a lot to answer for - but it's way too serious to laugh at.
I feel most sad for those starting out. A few years ago young people were damned if they did and damned if they didn't. A friend of mine said recently, ' They should rent, like everyone does in Germany.' But that is unrealistic; we don't have their housing infrastructure and in any case cultural norms are an important part of our self worth - in the UK owning a house is, for the vast majority of aspiring people, an central aspect of making progress in life.
But if ownership is legitimate, a lust for rising prices and the putative wealth it brings is destructive. It has always struck me as perverse that housing is the only essential product we want to see increasing in price - imagine if we had the same attitude to energy or food. I could go on, but I would probably scream after all.
I know that every generation has its trials and fortunes, but as I look again at the photo of my first house, I think it was truly a lucky break to be starting out then. I hope one day the cost of housing will return to something near affordability - though I doubt my particular definition of that word would be possible.
More's the pity, because I suggest we'd be better off if it did.
**********
P.S. And there you were thinking my last post of November would be a nice quiet round up. Nablopromo - no problem!
Posted by The bike shed at 4:10 PM

Labels: About me, November, Past Imperfect