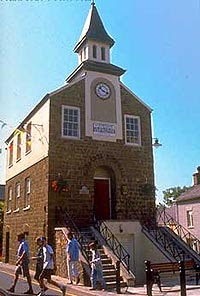 Town Hall - Narberth (image from Narberth COT)
When I first came to Pembrokeshire I would smile at a particular road sign on the A40: it read, Arberth Narberth. Bilingual roadsigns are commonplace in Wales, and though this one appealed me for its rhyme I never thought to visit the town. It was only when a traffic accident diverted me that I chanced upon one of the hidden gems of West Wales.
Narberth (or Arberth if you're talking Welsh) is about as untypical for Pembroke as it can get. For a start, it is not near to the sea, lying pretty much in the middle of the county. It is on what is known as the Landsker, the line dividing the English and Welsh speaking areas in South West Wales. The line is pronounced, but I have a feeling the people of Narberth knew something of the best of both cultures. And perhaps that explains the subtle and slightly poetic variation in the two names.
For Narberth is a sophisticated town. It has the best and most concentrated collection of boutiques, galleries, delicatessen, dress shops, antique dealers and cafes this side of Cardiff. It has a thriving arts scene too, and for years the Queen's Hall played host to bands which would never usually venture this far. It's a sort of Notting Hill in Wales, but much much better - because it lacks the pretence as well as the prices.
This morning Jane and I sat in the Ultracomidia delicatessen and had brunch. I ordered the set breakfast: toasted ciabatta with olive oil, Serano ham, tomatoes, a glass of freshly squeezed orange and think Spanish hot chocolate. It cost less than going to Mcdonalds. Jane had the same with Comte cheese and a cappuccino. We mixed and matched and decided we really ought to book for one of the tapas evenings. Frankly, I could have sat there reading Baudelaire and not felt out of place. 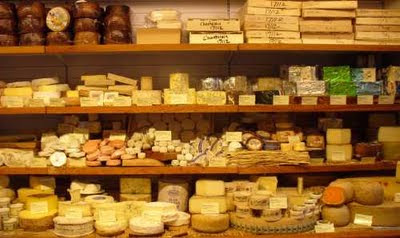 Cheese at Ultracomidia
And, dare I say it, this is rare in this part of Wales. Readers of this blog will know of my affection for Pembrokeshire, but one of its lesser aspects is that the heavy influx of summer tourists means there are few businesses with aspirations beyond this obvious source of income. Much of what passes as quality is little more than polished veneer.
In many towns - St David's is a good example - the low season feels deserted and shabby. Even in high season there is the seaside equivalent of pile it high - sell it cheap with a mix of dodgy crab sandwiches and tacky souvenirs. I'm being a touch harsh here - the lack of pretension is one of Pembrokeshire's delights too - but just sometimes I need a more sophisticated fix.
Narberth gets the balance right and works hard to keep it going. In the summer there is a food festival, an arts festival, and a brilliantly conceived children's festival - nicknamed the Narby Gras. In December there is a winter carnival and, of course, they do Christmas with lights and street sellers; similar efforts are made at New Year, Easter, Halloween.
If all this sounds a touch upmarket I guess that is true. But the important phrase in that last sentence is 'a touch', because the real delight of Narberth is that it is accessible to almost all. It is not expensive - eating there is cheaper than the tourist traps - and the town actively markets itself as offering superb value. Nor do you have to like bruschetta and olives to enjoy the place - the butchers does the best faggots I know of, and the chippy on the corner (The Contented Sole) does a great fish chips and curry sauce.
I could go on. But you can already tell I like Narberth. And you probably have as good an idea as you're going to get without going there. If you are down in West Wales, I'd strongly recommend you do.
Posted by The bike shed at 7:01 PM