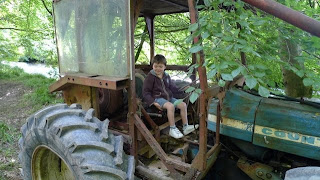 The Gwaun Valley tends to be overlooked by tourists: there are no obvious attractions, the access is difficult and the villages are, frankly, dour. And yet I like it a lot. We went there often when the boys were small, to walk by the river, pick blackberries or play in the water.
I returned today for the first time in a couple of years. We walked from Cilrhedyn Bridge to Llanychaer, the same route as always. It's not the most beautiful of walks, at least not by Pembrokeshire standards, and yet it has a rustic charm. The farms are worked hard, there are tyres in the fields, we found an abandoned tractor on the path today, the woodland is largely left to its own devices.

It seems the people of the Gwaun like doing things their own way. The valley is best known in Wales for celebrating Hen Galan, an alternative new year based on the Julian calender - equivalent to our 13 January. The valley pubs reputedly pay scant regard to licencing laws on that day, or many others for that matter. As if to underline this individuality, one of its few well known farms is Penlan Uchaf, which promotes the unlikely combination of beef from long horn cattle and having a show garden for visitors. And at Llanychaer there is a garden which incorporates a flush loo, a metal sculpture of a miner (or is it a farmer?) and a kitchen range built into the wall!
But for me, the Gwaun is all about the river. The valley sides are steep, making for fast run off after rain, and streams swell the main flow at regular intervals. Today the river was dashing over gravel beds and churning through the falls. The trees on either bank grow down to the water's edge and our path crossed many rills running between their roots. Outside of the summer, it's not a walk for keeping your feet dry.
In winter, the river turns quickly to spate. I have kayaked it many times, and though never hard it is not for the faint hearted. Below Llanychaer the river has carved a deep gorge, the walls of which are covered in rhododendrons. There is no way out, other than by boat, and though it is only a few miles to the sea the water can't seem to wait; the rapids follow one after another, no eddies, no place to stop - until, more quickly than you expect, the last rush over cobbles into the harbour at Abergwaun. 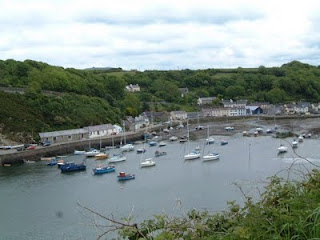 It's somehow satisfying to finish a river journey at the sea. I have kayaked all over the world, including descents of major rivers in Asia and the Alps, but I can think of none with a more delightful ending than the Gwaun. The old harbour at Fishguard is one of the most picturesque in Wales; in the Sixties it was used as the film set for Under Milk Wood. And yet there is no attempt to cash in; no shops, no pubs, no commemorative plaques. So typical of the Gwaun, and one of the reasons I like it so much.
Posted by The bike shed at 8:01 PM