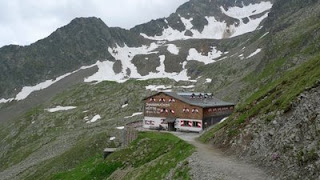 I tend to be quite good with alarm clocks; Jane sleeps through them, but once awake I’m usually up and ready for the off. Helpful when you have an early plane to catch from Gatwick, and as it transpired, even more important as our holiday progressed.

We arrived in Neustift with the usual uber efficiency that is Austria. Less than thirty minutes from Innsbruck airport we were sitting outside our hotel with drink in hand. The Sportspension Elisabeth is lovely, only 30 Euros a night for a gorgeous room with a balcony, a huge breakfast and helpful, friendly staff. I sat on our balcony noting the clear sky over the Elferspitze and mentally plotting our walk the next day. Perhaps I should have looked to the south, and the gathering clouds over the Stubai.

As it turned out the first day’s walk was fine - long, but there was no rain on the steady ascent to the Innsbrucker hut at 2400 meters. Now when I say hut, I should point out that Austrian huts are more like simple hotels: private rooms, showers, a bar and sun terrace - and usually a great crowd of walkers and mountaineers to meet and make friends. Our room was plain but immaculately clean and we went to enjoy a well earned beer.

As we sat in the bar, some walkers coming from the opposite direction started to arrive. They had walked from the Bremer hut, a 9 kilometer traverse over rough ground but nothing too serious and our planned route for the next day. As it was, many of them had taken ten hours to complete this short distance; they were wide eyed and clearly pleased to reach the hut. ‘Lots of snow,’ they kept saying, ‘Too much snow’. 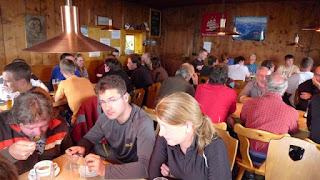 A storm broke that evening and we were joined in our immaculate but simple room by two German lads who grabbed the top bunks. There is a rule that huts never turn people away, and as the hut began to fill up with stragglers and benighted guests, concerns about privacy gave way to finding any spare beds going. Jane wasn’t too pleased at the prospect of sharing, but hey, it was only one night - let’s have another beer.

Next morning, a few diehards were preparing for the traverse but I knew it wasn’t for us; the sensible thing was to retrace our route of yesterday and sit out the storm in the hotel. Except as we were leaving the Hut Guardian pointed out there was another option; we could make a diversion, descend to a different valley and reascend to the Bremer Hut by a snow free route. I shouldn’t have listened...

The Hut Guardian was right, it was a safe route; what he hadn’t fully explained was that it meant a decent of nearly 5000 feet, followed a five mile walk along the valley floor as warm up to a further 5000 ft of ascent. It also pissed down all day - Jane lost three toe nails.

The path was well marked but as the snow gathered, route finding became a little fraught. We eventually found the hut by navigating towards the porch light that glimmered through the mist and snow. ‘This is the worst July on record,’ the Hut Guardian told me as I signed in. He also told me that there were no rooms, only the matratzenlager - a sort of communal bunk bed arrangement which we could share with twelve German climbers. Jane was too tired to care; more beer followed. 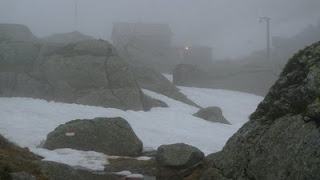 The forecast said the storm would clear in the morning, and as it was only a shortish hop to the next hut I thought we’d manage if we got going early. For some reason my watch alarm didn’t go off, but with with all the comings and goings (and other noises) in the dormitory, we were up and ready to leave by seven thirty. We signed the book and set off across the moraine under a clear if slightly greying sky.

And then a strange thing happened, something that I’ve experienced only a few times in my life - a sort of 'inner alarm clock' went off with a very loud clang!

Suddenly, and for no logical reason, I knew I’d made the wrong decision. Everything was as I’d planned - sure there was snow, but we had time enough to take a look and come back if necessary; we knew too that people had come this way yesterday without difficulty and they were no better equipped or experienced than us. So why turn back? I’m a logical person; I don’t generally relent to ‘feelings’, I know a lot too about controlling adrenaline and rationalising our fears - even Jane wanted to go on. Except with every forward step that inner clanging became louder and louder. Until eventually I said, ‘That’s it, we’re heading back.’

It was slightly embarrassing to return to the hut in less than thirty minutes, this time to sign in again and say we were returning to the valley. And yet I somehow knew this was the right decision. Jane kept asking, ‘You’re not doing this for me are you? I’m sorry I’m so unfit.’ I reassured her that this was not the case - it was me who wanted to go back, even though I couldn’t quite explain why. 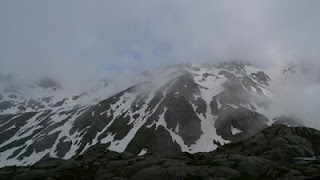 I said I’d heard that inner alarm a few times before. The first time had been twenty-seven years previous, in the same range of mountains, heading for the very same hut. I was climbing the Wildefrieger mountain, a high snow peak in the Stubai. It was nothing too technical, and I’d completed most of the climb when I spotted some clouds gathering over the summit. I knew something was wrong - couldn’t explain why, it just was - and I insisted on returning, at times running down the mountain, other climbers still plodding upward as I descended with my partner. Two hours later a colossal storm broke and I sat in the Nurnberger Hut counting the lightening strikes and wondering what it was that had urged me to return when nobody else had sensed the danger. Two people died on the mountain that day.

Over the years I learned to respond to my ‘inner alarm’, at times turning away from challenges that seemed well within my ability. I once walked round an innocuous looking rapid in Yorkshire and then watched in horror as my friend lost his a paddle and was caught in a recirculating wave. His body floated down the rapid, limp and unconscious; had I not been on the bank I would not have got to him in time. He spewed up a lot of river, but survived. There have been other examples, though few so dramatic.

In the usual efficient way of Austria we were back at our hotel within a few hours of reaching the valley. A bus, a train and another bus, and by mid afternoon we were sitting on the terrace as the sun broke through the storm clouds and the peaks appeared, glistening with fresh snow. Had Jane and I continued on our route we would certainly have been caught in a storm, and though in all probability we would have made it safely to the hut I was entirely comfortable with the decision to descend. There is no fun in being scarred witless and I’m too old, with too many good reasons to avoid unnecessary risks.

The remainder of our trip was tame by comparison. We took a rest day (the hotel owner kindly washed our kit) then headed back to the hills, this time to a valley at a lower altitude with less snow. It was a delightful walk but on arriving our hut was again beset by bad weather - our plans to go to the glacier were shelved. As we sat in the bar I remembered the first guidebook to the Alps I’d read; it kept repeating that the mountains will always be there, and that most deaths occurred when people forgot that.

On our last morning I was content to stroll down the valley; it poured for the full ten miles but I didn’t care. The mountains were lost in mist and the rainwater trickled into my mouth as I looked to the clouds. It never tasted so good. 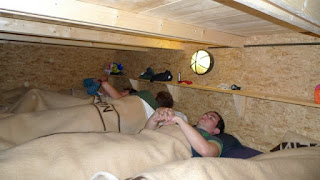