The heart and the head 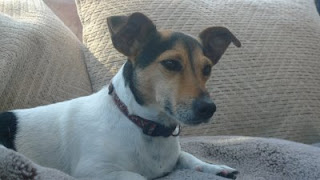 There are few conflicts as great as those between the heart and the head. A clash of ideas is at least open to debate; evidence and counter assertion holding sway. But the tension between our 'innate desires' and what we ‘know to be right’ is seldom amenable to reason. More usually, the choice is binary; and therein lurks tragedy.

Today, we gave away our dog. She will be well looked after; her new owners are doggy people and they know what they are taking on; we can keep in touch because they are friends of our neighbours. When I took her this morning, she settled in within minutes – barely registering my leaving.

And she is leaving us for good reason. When we bought her our boys were eight and nine; they had wanted a dog for a few years, but we waited until they were old enough. We’d had dogs before and we understood the commitment. What we didn’t expect, was a new baby within a year.

But whatever the background, there were always going to be tears today. Jane feels we’ve let the dog down; Daniel is upset to lose the puppy he raised. I was less close, but yesterday on Newgale beach she was a delight: scampering on the rocks, digging with the boys, chasing sea gulls. It brought back memories of walking with her over Bleaklow this spring, a perfect day.

This morning Jane and Daniel dried their eyes and I took some photographs of the dog on their laps. Dylan kept out of the way - Jack Russell’s and toddlers don’t mix. It’s not her fault (the concept doesn’t apply to dogs) – she does what terriers do when prodded and poked by a four year old. But there comes a point when you can no longer ignore the growling and the snarling. And that point came the other week.

Deep down I believe in reason. In the conflict between head and heart it is usually my head that wins. Perhaps this comes from studying philosophy – more likely I was predisposed to the subject. I know that reasoning is flawed, and that too, it is bound by our circumstance and culture. But it has always seemed to me that reason is the best we have – and that despite its failings, it gives much of what we take for granted. I struggle with those who casually disregard it in a few chosen area of life, but expect its safety net in others.

Am I a cold fish? I hope not. There is no necessary inconsistency in being moved and analysing its causes; between acknowledging our desires and recognising that logic has its place. But there you have it, I’m reasoning again.

Peepo bit Dylan last week. It was only nip; she was tied up – he was sprinkling grass on her head. The excuses are easy to find. For all my ranting I cared for the dog, she is a lovely creature, well cared for, well trained, and part of our family. But the fact remains; she bit a four year old child. A few weeks earlier she did the same to a walker in the Peak District – she was cornered, the stupid girl shouldn’t have stroked her, she was nervous. Excuses that time too - though not without some truth.

Aren't dogs supposed to be for life, Jane said. I agree with the sentiment, but the reality is sometimes different. Is it fair (on either side) to take the recommended and responsible measures (a mussel, constant vigilance, separation from visitors) just so we can ‘keep’ her? Sometimes we make honest mistakes; sometimes, despite our best endeavours, plans don’t work out. And when you’ve made compromise after compromise, there is a time to say ‘enough’.

But the inner conflict remains. For the only fact of the matter is that we are all, in our different ways, sad tonight. Even Dylan said he missed her. Do I think the dog would ever have bitten him seriously? No. But I wasn’t prepared to take the chance.

And therein lies a tragedy of sorts.