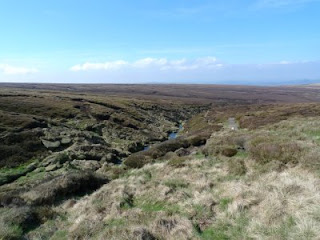 Bleaklow is not a good place to walk alone.  It's one of the darkest sections of the Pennine Way, a huge seething bog, a misty featureless plateau, a place for lost souls. Or so the reputation goes.
Saturday it was cold, the sun struggling to break through. I parked on the Snake Road and set off into the wind - alone, save for trusty Peepo who was eyeing the sheep and pulling at the lead. Best to get it over with I thought, pushing on up the hill. The path was mostly slabs - so much for a seething bog - in less than an hour I reached the Wainstones and Bleaklow Head.
On first impressions there's little here, even the peat has been eroded - a sad wooden pole leaning out of the summit cairn. It feels lonely, not a place to linger, though by the numbers of walkers I had passed it must be popular enough. I took off my hat and coat and set off towards Torside Resevoir; if I kept my head down I might get there in another hour.
Just over the rise I noticed a white stone in the peat hags; it seemed out of place amongst the gritstones. I looked again; perhaps it was a bag left by the slab layers?  Some urge made me walk over to investigate, plodging through the sticky peat towards the heather.  When I was a few feet from the stone, it moved - bounding up the hag and stopping to look at me before curling up again. A mountain hare!
I stood and waited.  Another appeared - this one had lost its winter coat - then another behind it, and another, a white one this time.  I had never seen hares on the moors before. They seemed untroubled by my presence, scampering about the hags, rising on their hind legs for a better view. A group of walkers I had overtaken well below the summit passed me, perhaps wondering what I was doing, standing ankle deep in the mire. 'There ain't nowt much up 'ere,' one of them joked.
A little further on the path follows a stream, the water dribbling over slabs into a series of pools, fresh with weed and moss.  Sitting here I saw many things: a dipper, a golden plover, two grouse, some wagtails, a kestrel hovering in the valley below. Peepo sat with me, drinking the water from the pool and sniffing at my hot cross buns but not partaking.
From Clough Edge I mentally traced the line over Black Hill, the next section of the Way. The wind was whipping up horses on the reservoir; I noticed the other walkers making their way on the lower path. Coming down the ridge I met the Park Ranger. He asked about my walk and we talked about the slabs that had improved access, encouraging many more people to visit.  'It's a funny thing,' he said, 'folk tend to do this walk in groups, but it's always the lone walkers who see the most.'
He confirmed it was a dipper and a golden plover I had seen. I told him about the hares. Did they still have their winter coats, he asked? Magnificent, we both agreed, and he left me to see for himself.
An hour behind my schedule, I walked past the reservoir to meet my lift at Crowden.
Posted by The bike shed at 8:13 PM